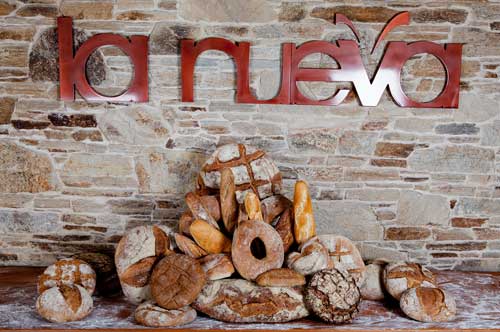 Baked bread originated in Egypt, thousands of years before Christ, and the Romans introduced the oven in Europe. In those days, yeast didn’t exist; it made its first appearance in the 16th century when it was first used by French bakers and baking was made in hot ashes. The cakes were thin and they were used as plates to serve food on, or as trays to cut meet, whereupon the bread got drenched by its juices. These cakes were often eaten at the end of the meal as dessert.

Already in the Middle Ages, we settled down by the River Belelle, in Northern Galicia, Spain. This river forms in Neda the waterfall “Salto de la Fervenza”, with such a discharge to profit from that several important industries emerged, among them, the water mills. These conditions, as well as the fact that the waters of River Belelle are of the greatest quality, give birth to the bread baking tradition of the town.

At the end of the 16th century, in 1558, King Philip II of Spain chose Neda as the place to establish the so called “Casas Reales”, i.e. cake factories and ovens. This area was chosen due to the excellent communication possibilities between the town and Ferrol’s port, but also because of its old bread baking tradition.

The waters of the River Belelle were already then considered among the best for yarn bleaching, for bread baking and for health issues. This is why the crackers or cakes for the naval forces of the Spanish Kings were baked in Neda for a whole century.

The years go by and, already in modern times, in 1917, a sixteen page brochure under the title “Analytical, Bacteriological and Chemical Study of La Fervenza Waters” comes out of “El Correo Gallego” printing house. The study had been conducted by Don Santiago De La Iglesia, director of the town’s laboratory, by order of Ferrol’s Mayor.

In this report, the chemical composition of the water is described in detail, and the conclusion is that these waters are “very good” and bactereologically speaking “extremely pure”. Besides, they find certain organisms that belong to the fungi family, among them the “pencilium”. This discovery enhances the already mentioned

virtues of our river.

Also, they say that the flours made with these waters aquire important qualities as regards whiteness and substance.

During the 17th, 18th and beginning of the 19th centuries, Neda was considered the capital of wheat in Galicia.

Moving forward to the 21st century we find that water mills are no longer used to grind the corn, however there are still excellent resources, both natural and traditional, which have given Neda’s bread its Quality Brand.